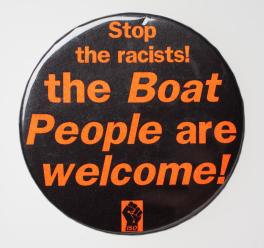 Check out this great article by John Pilger –  Australia’s stop the boats policy is cynical and lawless. He nailed it right on the head. Except for Aborigines, everyone in Australia came in some kind of boat (or plane). It’s so sad that I’m living in a country with such rampant racism and so much fear-mongering. Really, what ever happened to giving people a ‘fair go’? Or does that only apply to the right kind of people? There are obviously the wrong kind of people; the ones who are left to drown so close to our shores, and the ones abandoned in detention camps.

As an Australian citizen, it makes me wonder who I’m going to vote for when September comes. It’s either Rudd or Abbott, and both aren’t exactly shining beacons for humanity. Voting for Kevin Rudd makes me sick, but I’ll do it anyway echoes my sentiments.

Times like this, I wonder if alien invasion is needed to level out the playing field. You know, nothing like a healthy dose of intergalactic terror to make the world realise that HEY WE ARE ALL HUMAN SO LET’S PLAY NICE! Maybe that’s why I really enjoyed the Mass Effect video game series. Humanity was finally united. We were the immature species compared to the other aliens who figured out awesome technology way before we did.

Sigh. If this is how the government treats the most vulnerable sectors of humanity, then we’ve got a long way to go.

All Things Poetic About Singapore

A Writer With A Difference