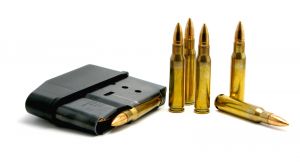 When I read the Huffington post article Walmart Pulls Bushmaster Rifle From Website In Wake Of Newtown Shooting – I couldn’t believe it. You mean you can order guns from the Walmart website? Doesn’t take a genius to work out how that could contribute to the sorry state of shootings in America. But wait – guns don’t kill people, people kill people. *facepalm*

The bulk of my online shopping goes towards buying books. I guess other people buy guns. Good grief. The tragedy at Sandy Hook has had other ramifications – namely, a spike in gun sales. There’s an entire culture of fear-mongering that’s rife in America, especially when it comes to limiting gun sales.

After high-profile shootings, debate over gun control can cause consumer demand for guns to rise, government records have shown. Industry experts say fears that stricter laws will follow such incidents push people to stock up on firearms before regulators can clamp down. But last weekend’s spike in business was unprecedented, gun shop owners in California, Connecticut and North Carolina told HuffPost.

The National Rifle Association of America is made up of four million moms and dads, sons and daughters – and we were shocked, saddened and heartbroken by the news of the horrific and senseless murders in Newtown.

Out of respect for the families, and as a matter of common decency, we have given time for mourning, prayer and a full investigation of the facts before commenting.

The NRA is prepared to offer meaningful contributions to help make sure this never happens again.

The NRA is planning to hold a major news conference in the Washington, DC area on Friday, December 21.

Details will be released to the media at the appropriate time.

What is meant by ‘meaningful contribution’ remains a mystery. The press conference will get a lot of air-time, but it’s just another smokescreen. There’ll be another shooting, and it’s only a matter of time before that happens.

In other news, an asteroid Toutatis had  a close shave with Earth! For all of the drama that humans generate on this planet, it really doesn’t take much to wipe us all out. Namely, an asteroid hitting earth. According to the article, we’ll be okay for the next 400 years. From this particular asteroid, at least. When it comes to being safe from guns, on the other hand….

Toutatis would cause catastrophic damage if it ever did slam into Earth, potentially extinguishing humanity and many other species. In general, scientists think a strike by anything at least 0.6 miles (1 km) wide could have global consequences, most likely by altering the world’s climate for many years to come.

For comparison, the asteroid thought to have wiped out the dinosaurs 65 million years ago was an estimated 6 miles (10 km) across.

A Writer with a Difference

Health & Family
To Be Aware

It's all about disbelieving your thoughts